During the Eastern Economic Forum, which took place in Russia’s Far Eastern Capital Vladivostok in September, the Government of Sakhalin Region signed an agreement. AI-based self-driving transport technologies will be developed and implemented with Cognitive Pilot, a Moscow-based developer of autonomous driving systems for rail transport and agricultural machinery. The third partner is Russia’s biggest bank Sberbank.

Freight and shunting locomotives will be equipped with Cognitive Rail Pilot to increase safety and accelerate the shift of freight to the railway in the region. Sakhalin is an island, so ferries deliver railway cars carrying goods from the mainland to the island and back. Russia aims to make Sakhalin carbon neutral by 2025, the first region to do so in the country. By 2030, hydrogen-powered locomotives will also be developed in the region, with the same system.

The main functions of the driver assistance system are stopping at a red light, stopping in danger of collision, stopping before a closed arrow, and high-precision locating of the locomotive. 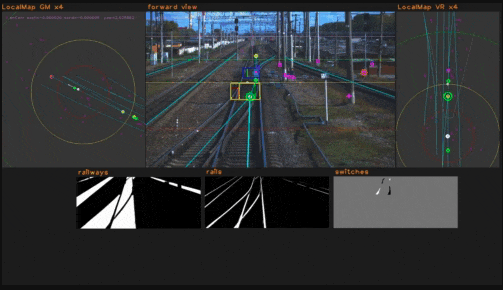 The system is already ready for mass commercial production, and implementation on a large scale can begin on Sakhalin, according to Cognitive Pilot. In total, the company plans to manufacture more than 2,000 systems in 2021. In addition to Russian Railways, Cognitive Rail Pilot also received orders from France, Denmark and Germany, and the first contracts were signed with European customers.

Cognitive Pilot will also be involved in the development of autonomous vehicles for the region’s network of airports to speed up cargo handling and reduce flight delays. Besides that, the Sakhalin region will expand the use of the Cognitive Agro Pilot autonomous driving system for agricultural machinery.

The autopilots are made at a robotic factory in Tomsk, which Cognitive Pilot opened last year to assemble medium and small series of intelligent systems for smart trains and artificial intelligence. Comprehensive testing took place in 2020/2021. During testing, the complex has confirmed its efficiency and even made it possible to save a person’s life. “During the trials, there was a case where a drunk man jumped under the wheels of a train and the train braked”, said the head of Cognitive Pilot Olga Uskova.

Research with the university

The Sakhalin region is a region with harsh weather conditions that require additional measures for appropriate adaptation of AI systems. That is why the parties consider it necessary to open a R&D office of Cognitive Pilot in the region. The office will work closely with the Sakhalin State University. Such a partnership will enable the involvement of young professionals in the field of AI and conducting promising research and development.

Olga Uskova, CEO of Cognitive Pilot: “In the near future, we expect to see the first results of the announced world-class projects based on Artificial Intelligence technology. By the conditions of an agreement, the parties will develop a testing facility on the island for modern AI-based technologies tests in the field of autonomous transport. All the points of the agreement will be fulfilled by 2030.”